Think on these things...

From The Imitation of Christ

IT IS good for us to have trials and troubles at times, for they often remind us that we are on probation and ought not to hope in any worldly thing. It is good for us sometimes to suffer contradiction, to be misjudged by men even though we do well and mean well. These things help us to be humble and shield us from vainglory. When to all outward appearances men give us no credit, when they do not think well of us, then we are more inclined to seek God Who sees our hearts. Therefore, a man ought to root himself so firmly in God that he will not need the consolations of men.

When a man of good will is afflicted, tempted, and tormented by evil thoughts, he realizes clearly that his greatest need is God, without Whom he can do no good. Saddened by his miseries and sufferings, he laments and prays. He wearies of living longer and wishes for death that he might be dissolved and be with Christ. Then he understands fully that perfect security and complete peace cannot be found on earth.

Many people try to escape temptations, only to fall more deeply. We cannot conquer simply by fleeing, but by patience and true humility we become stronger than all our enemies. The man who only shuns temptations outwardly and does not uproot them will make little progress; indeed they will quickly return, more violent than before.

Little by little, in patience and long-suffering you will overcome them, by the help of God rather than by severity and your own rash ways. Often take counsel when tempted; and do not be harsh with others who are tempted, but console them as you yourself would wish to be consoled

In temptations and trials the progress of a man is measured; in them opportunity for merit and virtue is made more manifest.

When a man is not troubled it is not hard for him to be fervent and devout, but if he bears up patiently in time of adversity, there is hope for great progress.

Some, guarded against great temptations, are frequently overcome by small ones in order that, humbled by their weakness in small trials, they may not presume on their own strength in great ones.

The plain fact that different individuals and groups make different choices is resolutely ignored, because it does not fit the prevailing preconceptions, or the crusades based on those preconceptions.

Statistics are no substitute for thought -- certainly not in government policies, and especially not in Supreme Court decisions. 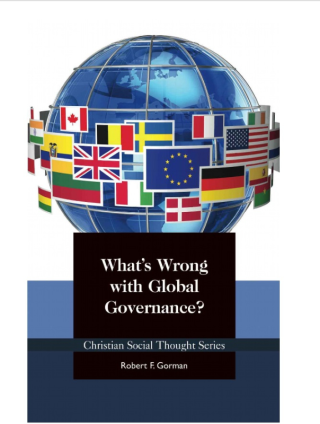 Global governance can imply much more than simple international coordination and cooperation, which has existed throughout modern international relations. Now it is also a deeply and widely embedded ideology that seeks global centralization and regulation of wide-reaching areas of international interaction.

Global governance ideology has more ambitious aims that include eroding and eliminating national sovereignty by reducing national governmental control over the movement of people, goods, services, and capital across national boundaries. It seeks to establish an entirely secular order in which activities such as education, health care, economic development, and justice are fashioned by global experts rather than by the leaders in their natural local and national contexts. Rule by experts, by global bureaucrats, is regarded as the ideal.

Who are these "experts" and global bureaucrats? (Bold emphasis mine)

They are secularists who are at best suspicious of but often outright hostile to religion and traditional culture as influences on civilization. They are bureaucrats or advocates of bureaucracy who believe that government by expert rather than by elected officials is the only way to advance a progressive agenda of modernization. They are environmentalists who, to varying degrees, regard human beings and human population growth as a scourge on global ecology. They are thus almost universally population-control advocates who regard the family, especially the traditional family and the religious beliefs of families, as a threat to environmental integrity. Often they are eugenicists who wish to reduce the fertility of less desirable peoples—Julian Huxley, the first administrator of the United Nations Educational, Scientific and Cultural Organization (UNESCO), being a prominent example. They are transnationalists who believe that the nation-state is an anachronistic cultural construct in need of deconstruction.

They are materialists who ultimately deny the transcendent spiritual nature of human beings and who thus are concerned almost exclusively about the physical and emotional needs of people. They are relativists who generally reject the concept of objective moral truth, of natural law, or of the religious and spiritual dimensions of the human person. They regard power and control as the mechanisms by which to remake the world in their own image. They are centralists who have little regard for the rights of subsidiary bodies, local agencies of mutual aid and support, churches, local governments, or even national governments that wish to preserve their distinctive ways of life.

In short, they are, trouble. Read the entire book from Acton's Christian Social Thought Series to find out more.

After the lionizing, make sure you read the articles below:

Unfortunately, his death comes a bit too late—about sixty years too late. Millions of his people had been awaiting this moment for well over half a century. And as we Cubans rejoice, we weep. Our losses over the past six decades have been far too great, and so our glee is far from unbridled.

Slavery is what Fidel’s revolution was about. Brooking no dissent, he enslaved a nation in the name of eternal class warfare, creating a new elite dedicated to suppressing their neighbors’ rights. He pitted Cubans against one another, replacing all civil discourse with invective and intimidation.

Fidel boasted that he was loved by the Cuban people and spoke for us, that he was our very embodiment. But these were some of the boldest of his many big lies. The Cuban people he spoke for were but a monstrous abstraction, a figment that he projected onto the world stage. Flesh-and-blood Cubans had to be forced to attend his interminable speeches, or, as now, his funeral.

It is polite, human, and common to withhold criticism of the dead in the immediate aftermath of their demise. But leaving 11 million people grossly poorer than they ought to be in the name of a bankrupt ideology is not the stuff of which hagiographic obituaries are made.

As much of the American left is openly mooting whether or not the American president-elect is a dictator-in-waiting, one has to wonder whether they would take that bargain: No more elections, no more free speech, no more civil liberties of any kind, but socialized medicine and literacy for everyone! American political dissidents, homosexuals, journalists and the clergy, just like in Cuba, can languish in prison or internal exile, but at least they'll be able to read the charges against them.

In Cuba, Castro led idiots to believe that his revolution put culture, education, and health above material values—just what Sartre and company wanted to hear. Until recently, visitors to Havana were shown a hospital, a school, and a bookstore. I myself had the privilege of visiting these Potemkin villages. The hospital was a show pony reserved for the country’s leaders. The bookstore was devoted to the works of Castro. The school did nothing to improve Cubans’ educational levels, which, before the revolution, were the highest in Latin America.

The Glamour of Atheism

The Glamour of Atheism, Part I

In our efforts to meet the challenges posed by skeptics, we Christians frequently overlook the appeal of atheism. As we shall see, we ignore this appeal at our own peril. In this podcast series, we’ll ask the question, “Why would anyone want to reject all belief in a god or gods?” I can think of many reasons. We’ll explore those reasons in this episode. By the way, if you’re a skeptic and feel that I’ve misrepresented you in any way, I’d love to hear what you find most appealing about your intellectual position. You can tell me on Twitter @cammcallister7

See more on Atheism and Skepticism

How To Read Democracy In America