"We live in a time where there is a proliferation of edifying media available on the web for the Christian, but there isn’t a clear way to aggregate this media into a produced, filtered format. Simply putting everything on the web doesn’t mean everyone will find it. Yes, some people want an à la carte approach with choosing from a multiplicity of podcasts or searching through long lists and that works well for them. Yet others want an always-on streaming approach. As we see it, the Christian community has only just begun to tap the internet’s potential for spreading trustworthy biblical teaching to every nation, tribe, and language on this earth.

It’s for these reasons that we have created Ligonier’s newest outreach: we call it RefNet."

The Dark Knight in Denver

"More than 100 police officers responded to the scene in Aurora, just a few miles from Columbine High School, where in 1999 two high school students killed 12 fellow students and one teacher in a rampage that also injured 21 other students. That school massacre became a milestone in the nation's legacy of violence. Now, yet another Denver suburb joins that tragic list.

The inevitable media swarm focuses on the data first -- the who, what, when and where questions. Then they, along with the public at large, begin to ask the why question. That is always the hard one.

The same vexing but inescapable question comes every time a Columbine happens or an Anders Behring Breivik attempts to justify his mass homicide. How could such a thing happen? How could a human being do such a thing?"

"Indeed, it is well known to students of human societies that an increase in prosperity often brings with it a precipitous decline in religious involvement. After all, why would anyone need God when there is Master Card and Visa?  The declining numbers in churches in the Western World seem to affirm that Wesley's fears were warranted. Christian leaders speculate that if current trends continue in England, for example, Methodists will cease to exist in that country in thirty years. Of course, long before Wesley uttered his fears, Jesus warned his disciples: "No servant can serve two masters; for either he will hate the one, and love the other, or else he will hold to one, and despise the other. You cannot serve God and riches" (Luke 16:13) . Jesus warns of the idolatry that so easily entraps us, luring us away from faithful allegiance."

"Just Thinking is a teaching resource of Ravi Zacharias International Ministries and exists to engender thoughtful engagement with apologetics, Scripture, and the whole life." 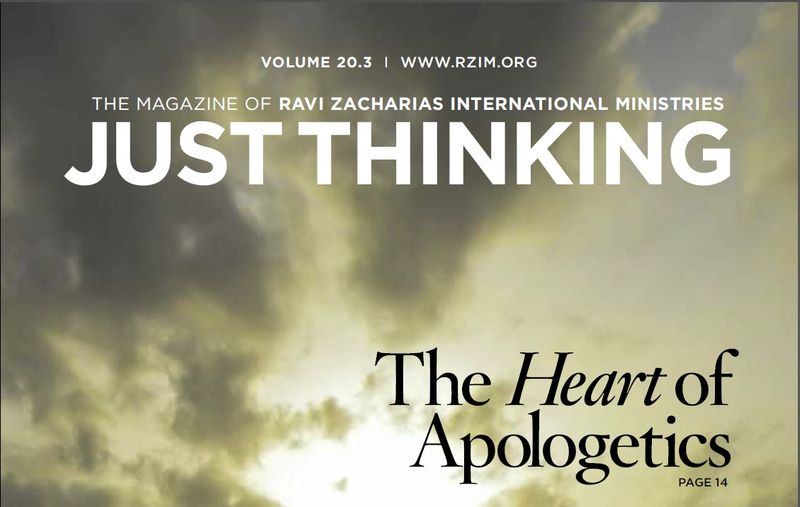 If you've never read Dr. Sowell, you might want to start doing so, like yesterday. Basic Economics is a great place to start. Here are a few articles from the good Doctor:

"Outcome differences are called "class" differences. Thus when two white women, who came from families in very similar social and economic circumstances, made different decisions and got different results, this was the basis for a front-page story titled "Two Classes, Divided by 'I Do'" in the July 15th issue of the N.Y Times. Personal responsibility, whether for achievement or failure, is a threat to the whole vision of the left, and a threat the left goes all-out to combat, using rhetoric uninhibited by reality."

"But let's go back to the notion of "spending" money on "the wealthiest Americans." The people he is talking about are not the wealthiest Americans. Income is not wealth -- and the whole tax controversy is about income taxes. Wealth is what you have accumulated, and wealth is not taxed, except when you die and the government collects an inheritance tax from your heirs.

People over 65 years of age have far more wealth than people in their thirties and forties -- but lower incomes. If Obama wants to talk about raising income taxes, let him talk about it, but claiming that he wants to tax "the wealthiest Americans" is a lie and an emotional distraction for propaganda purposes."

"Nothing produces more of a sense of the futility of facts than seeing someone in the mass media repeating some notion that has been refuted innumerable times over the years."

The Gospel in Light of New Spirituality

Was all about Infiltration:

I think it's safe to say that Dieminion has the best Guile right now:

Nothing more frustrating than to try to get in on a Gouken who has a life lead:

"Reason and argument are tools God has given us to discover truth.  Learn to use them well, especially when it comes to eternal matters.  Too much is at stake to settle for sloppy thinking.  Making mistakes about eternity is no laughing matter."