"It's Windows reimagined and reinvented from a solid core of Windows 7 speed and reliability. It's an all-new touch interface. It's a new Windows for new devices. And it's your chance to be one of the first to try it out."

A Christian Understanding of Gambling

"The most insidious dimension of the problem is the role of government in legitimizing and promoting the gambling enterprise. Though outlawed until 1964, state lotteries now represent the most popular form of legal gambling. Turning vice into an economic virtue, these states take advantage of their most gullible citizens, while touting benefits the gambling revenues supposedly make possible.

Gambling corrupts the culture, polluting everything it touches. Recent scandals in college basketball are proof positive that gambling is not a problem limited to casinos and horse tracks. Ominously, industry executives see great promise in the development of on-line gambling over the Internet, bringing gambling to every computer terminal and overcoming state regulation.

The silence and complacency of the Christian church must end. As the late pulpiteer R. G. Lee used to remind us, there will be a “payday, someday.” The Church had better not bet on this problem just going away."

Ravi Zacharias: On the meaning of life

Ravi Zacharias Lecture in Leuven from CityLife Leuven on Vimeo.

"The apologetics.com crew continue their series on the foundations of apologetics, discussing this week how to build an argument, and also how to assess them as well. They address reasoning mistakes such as false dilemmas, self-refuting arguments, the strawman fallacy, and even the two informal fallacies that are the pillars of comedy. Listen in and sharpen your mind!"

"Amid the sound and fury of the latest culture-war battles — first over breast cancer dollars and Planned Parenthood, and then over the White House’s attempt to require that religious employers cover contraception and potential abortifacients — it’s easy to forget that there is at least some common ground in American politics on sex, pregnancy, marriage and abortion."

"While talk about "fairness" may provide a fig leaf to cover politicians' naked attempts to grab more and more of the nation's resources to spend, there is no assurance that raising tax rates on "the rich" will result in any more tax revenue for the government. High tax rates have too often simply caused wealthy people to put their money into tax-free securities or to send it overseas."

Why I Hope Real Books Never Die (and They Won’t)

"I have tried to get into ereaders. Really I have. First, someone was kind enough to give me a Kindle. It seemed pretty cool at first. I could download books instantly. I didn’t have to weigh down my carry on bag when traveling. What a treat.

I read two books on my Kindle and got tired of it."

Should Christians Impose Their Moral Standards on Society?

"Today's challenge is a common complaint. Because Christians have moral concerns with homosexual behavior, it is alleged that they shouldn't be allowed to impose their standards on the rest of society."

Just Give It Up

"Our eldest, then about two years old, one day announced “I want . . .” but did not finish the sentence. My wife and I waited for her to tell us what she wanted — to be picked up and rocked? a cup of milk? her stuffed bear? — but again she said only “I want” and let her voice trail off. She said it a third time, still sounding equally unsure about what she wanted. And then, with a look of enlightenment on her face, said in a loud, firm voice, “I want!”

There, I thought, was the fallen human condition expressed. We are creatures of ravenous, indiscriminate desire. We want this and we want that, but most of all, We Want.

Also see, How Lent Can Make a Difference in Your Relationship with God

Archaeology and the Exodus from Egypt

The Faith of Jeremy Lin

"Know therefore that the LORD your God is God, the faithful God who keeps covenant and steadfast love with those who love him and keep his commandments, to a thousand generations, and repays to their face those who hate him, by destroying them. He will not be slack with one who hates him. He will repay him to his face. You shall therefore be careful to do the commandment and the statutes and the rules that I command you today."

"What I tell you in the dark, say in the light, and what you hear whispered, proclaim on the housetops. And do not fear those who kill the body but cannot kill the soul. Rather fear him who can destroy both soul and body in hell. Are not two sparrows sold for a penny? And not one of them will fall to the ground apart from your Father. But even the hairs of your head are all numbered. Fear not, therefore; you are of more value than many sparrows. So everyone who acknowledges me before men, I also will acknowledge before my Father who is in heaven, but whoever denies me before men, I also will deny before my Father who is in heaven."

The Intolerance of Tolerance 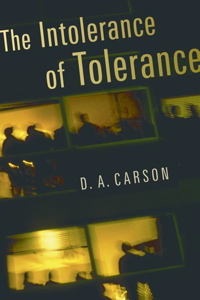